Autoscaling like a pro: how to use EC2 Auto Scaling Lifecycle Hooks, the right way.

Have you ever found it useful to access an EC2 instance, belonging to an Auto Scaling Group, to configure it or to simply get an idea of what went wrong before an unexpected termination?

Well, in those cases EC2 Auto Scaling Lifecycle Hooks come in handy. In this article, we will give you a deep understanding of how Lifecycle Hooks work and what are their common use cases.

Besides manual scaling, in which you actively change minimum, maximum or desired capacity, there are two automatic scaling types: Scheduled Scaling and Dynamic Scaling.

Scheduled Scaling should be used if you know in advance how your application’s traffic patterns behave. In this case, you have to create a rule, called scheduled action, that instructs Auto Scaling to increase and decrease the Auto Scaling group’s capacity based on predicted load changes.

Instead, when you need to scale in response to load changes that are not predictable Dynamic Scaling comes to the rescue. It provides different policy types that you can use to instruct Auto Scaling how to react to demand changes. There are three types of Dynamic Scaling policies:

Pending and Terminating transitional states can be paused through EC2 Auto Scaling Lifecycle Hooks, to perform custom logics during instances’ launch or termination.

In the same way, Terminating the state’s Lifecycle Hook is called EC2_INSTANCE_TERMINATING and it handles Terminating:Wait and Terminating:Proceed additional states.

Lifecycle Hook’s result can be either CONTINUE or ABANDON. EC2_INSTANCE_LAUNCHING’s result determines whether the instance should be terminated or put into InService state. On the other hand, EC2_INSTANCE_TERMINATING’s result does not affect EC2 instance’s lifecycle; it always ends up in the Terminated state.

You may be wondering why you should hook Pending and Terminating states! Well, it obviously depends on your application scenario.

The following are some of the common use cases where pausing Pending, Terminating or both transitional states is helpful.

As mentioned before, you can pause an EC2 instance lifecycle to Pending state and configure it before it moves to InService state. This is critical when the setup takes considerable time, avoiding the instance to receive requests when it is not yet ready to handle them.

For example, AWS CodeDeploy service relies on EC2_INSTANCE_LAUNCHING lifecycle hook to manage application deployments to EC2 instances that belong to an Auto Scaling group. This behavior is perfectly described in the AWS DevOps Blog’s article “Under the Hood: AWS CodeDeploy and Auto Scaling Integration”.

A: “Ehm… logs were on the instance. We’ve no other copy of them.”

Well, if your common practice is to exploit an agent to push logs periodically to another place, you will never end up in such a situation. But you know, bad things happen!

B: “Sure! The log exporting agent was installed on it.”

A: “Yes, but it seems it wasn’t working. Maybe it crashed.”

In this case, EC2_INSTANCE_TERMINATING hook allows you to upload logs to another place, for example, an S3 bucket.

Sometimes it can be useful to log into an EC2 instance to understand what went wrong. Using EC2 Auto Scaling Lifecycle Hooks, an SNS Topic and a Lambda Function, you can easily set up a system that notifies you when an unhealthy instance is terminated. The role of the Lambda Function is to let the instance’s lifecycle proceed if it is healthy and to notify the user if it is unhealthy.

Now we will demonstrate how to set up an EC2 Auto Scaling Lifecycle Hook that waits until initial configuration completes before putting a new instance to InService state.

The configuration step is represented by a User Data script, defined in the Auto Scaling group’s Launch Template.

The User Data is going to install Apache Web Server on Ubuntu 18.04. When the installation is completed, it harvests the instance-id and uses it to complete the lifecycle action with CONTINUE result, which tells to the Auto Scaling group to put the instance into InService state.

If anything goes wrong, complete-lifecycle-action command will be invoked with ABANDON result, telling the Auto Scaling group to terminate the instance.

Firstly, you have to create a new Launch Template, specifying ubuntu/images/hvm-ssd/ubuntu-bionic-18.04-amd64-server-20190722.1 as the source AMI and the configuration script, described above, as User Data field.

Then, you can create a new Auto Scaling group based on the just created Launch Template. During the Auto Scaling group configuration, specify one or more subnets in which the EC2 instances will have internet access to. Otherwise, they will not be able to install Apache Web Server.

Before moving on, make sure that the Auto Scaling group’s initial DesiredCapacity and min parameters’ values are set to zero; the initial max parameter’s value can be set to one.

Move to the Auto Scaling group’s Lifecycle Hooks tab and click the Create Lifecycle Hook button. Configure the lifecycle hook as illustrated in the picture below. 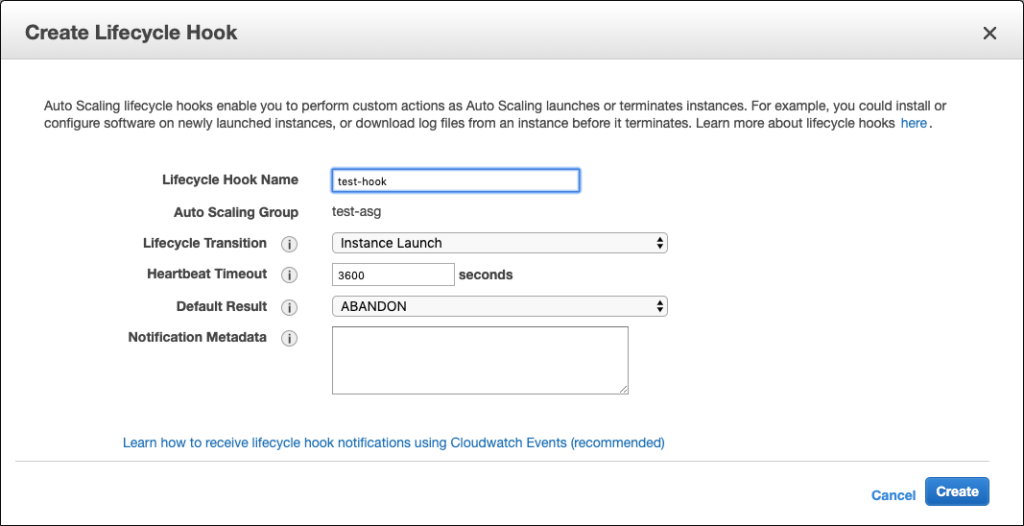 To test the lifecycle hook’s behavior, increase the DesiredCapacity parameter’s value by one.

When the Status column changes to InService, log into the new EC2 instance through SSH. To check the status of the Apache Web Server, type

If the response of this command is something like…

… it means you have successfully installed Apache Web Server on your Ubuntu 18.04 instance during the instance lifecycle’s Pending:Wait state; the instance changed its state to InService only after a successful configuration!

In this article, we focused on how Lifecycle Hooks work and how they can come in handy in everyday dev-life. Did you try any further configuration? Tell us more in the comments!